Human Papillomavirus has long been identified as the major cause of cervical cancer which is ranked the fourth most prevalent cancer in women and fourteenth among all cancers worldwide, according to recent data. [1] The highest incidence of cervical cancer is observed because of two high-risk HPV types, 16 and 18. HPV type 16 is also predominantly responsible for other sexually transmitted cancers types such as vaginal cancer, vulval cancer, penile cancer, anal cancer, and oropharyngeal cancer. [2] While there are three commercial vaccines available, namely Gardasil, Cervarix [3] and Gardasil 9, the coverage of vaccination, especially among the lower strata of the population [4], is subpar due to multifarious reasons, including but not limited to affordability, social taboos, and lack of awareness. Consequently, the mortality rates due to cervical cancer among women from underprivileged socio-economic backgrounds are much higher. Therefore, there is a dire need for increased research in the development of antiviral therapeutic drugs against HPV which target the viral molecule rather than stimulating the immune system. 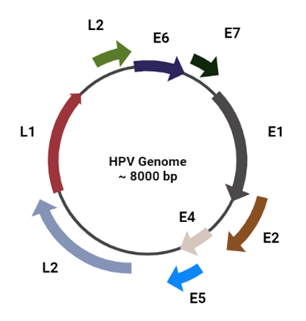 Fig 1: The Genomic structure of HPV type 16 and the coding regions for each protein.

HPV is a non-enveloped virus and has a double-stranded DNA which is approximately 8 kb in size and codes for 8 early proteins and 2 late proteins, namely E1, E2, E3, E4, E5, E6, E7, E8 and L1, L2 (Fig 1). Each protein has a specific function to perform, ranging from DNA replication to epithelial invasion and carcinogenic activity. Recent studies to develop antiviral drugs have specifically focussed on the inactivation of these proteins.[5] Among them, E1 and E2 are involved in viral genome transcription and DNA replication, and thus are essential for the survival and proliferation of the virus. HPV DNA replication requires the E1 and E2 protein to form a ternary complex, and the inhibition of this interaction is known to halt the DNA replicating activities of the virus. This inhibitory behaviour is shown by a category of small molecules termed indandiones-containing inhibitors. Indandiones are chemically β-diketones with the formula C9H6O2, and inhibit the E1-E2 protein interaction by binding to the TAD domain of E2 protein, the same active site that binds with E1.[6]

This study is aimed at analysing the identified indandiones-containing inhibitor molecules and their inhibitory action of the E1-E2 protein complex formation using in silico techniques. Initially, an extensive literature survey will be conducted to collate the existing indandione-containing inhibitors. The protein sequences of both E1 and E2 will be retrieved from the Uniprot and the NCBI Protein database and then their 3D structure model will be generated on the intFOLD platform through the ab-initio method. The ligand molecules will be retrieved from the Pubchem database. Molecular docking of the target protein and ligand will be performed using the Discovery Studio software, while the ADMET predictions will be made through the pkCSM software. The results obtained for each ligand molecule will be compared to draw conclusions about their efficacy and feasibility (Fig 2). Through this study, we aim to direct research towards the development of HPV treatments, which is necessary to overcome the limitations of vaccines and bridge the socio-economic divide made by the uneven distribution of HPV vaccines and the social stigma associated with the disease in itself. 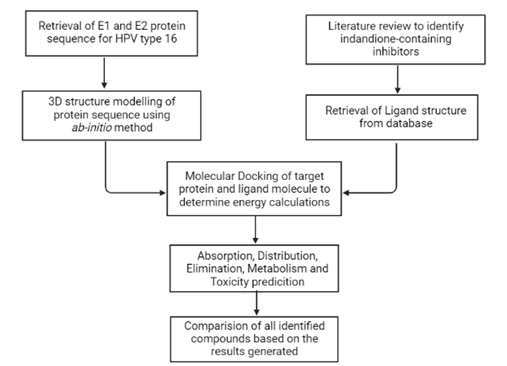