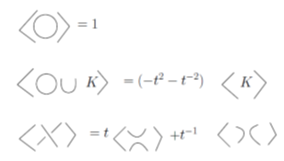 Note that here and below

is the unknot. The Jones polynomial, denoted by  is determined by the following skein relations given in fig. 2, derived by R. Kirby and P. Melvin [7], and the associated skein modules were introduced by R. Gelca and A. Uribe in [4].

To construct the skein module, let M be an orientable 3-dimensional manifold and let , be the set of isotopy classes of framed links in M , including the empty link. Consider the free module over  with basis , denoted by . Define S(M) to be the smallest submodule of  containing all the expressions of the form shown in figure 2, where the links in each expression are identical except in an embedded ball, where they look as depicted. The Reshetikhin-Turaev skein module, ,of M is defined to be the quotient . 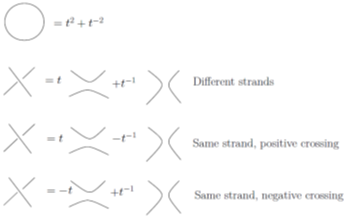 The main purpose of this paper is to present the relationship between Reshetikhin-Turaev skein module and the Kauffman bracket skein module of the figure-eight knot complement.

You may also start an advanced similarity search for this article.