Women’s empowerment is an important goal in achieving sustainable development worldwide. More often it is related to their physical aspects. Though women empowerment refers to increasing the spiritual, political, social, educational, gender or economic strength of individuals and communities of women, the rationalized thinking plays a vital role in the process. The purpose of this research is to identify the thrust areas which are more prominent among rural women on their mental aspects. In modern times, people come to the conclusion that there is a progress in the life of women in terms of their safety and security after outwardly noticing the urban trends.

The factors that prompt us to get into this research are clear when one witnesses in the rural areas.  It is absolutely clear that only a rare empowerment happening in the society with respect to women. The close observation shows that the rural areas are still under the clutches of social evils such as wrong belief which drives them out of their peaceful life, afraid of self-declared or dreadful appearance of religious leaders (so called), submitting to the fortune tellers, early death of men due to drug addiction, school dropout due to shouldering family burden etc. The women celebrities who are on par with men are applauded for their accomplishment. Though we have many men experts, women are celebrated when achieving in any fields. This makes us to think that it is an uncommon fact.  Unless there is a change in the attitude and mind set, it is quite difficult to enhance the status of women. One can easily say after experiencing the  prevalence of societal evidences that the attitude matters more than that of physical strength. There is a wrong notion still be noticed in the society that physical strength is a factor.

It is important to comprehend that the fear of men in rural areas make the women to pretend as if they are strong by using abusive languages loudly and constantly. They lose their mind, strength and go to any extreme to the situation. It is miserable to note that there is no realization at the situation. But, later, result of terrific consequence, leads any one to have pity on them. It is a matter of concern where a research and implementation of philosophical or societal activities in terms of mental awakening might play a important role to empower women.

Are our women really empowered? I would say “no”, not until they themselves change their mind set. Agreed, women are taking rapid strides in each and every field and profession, and are holding different positions—right from train and truck drivers to the more sophisticated engineers, doctors, pilots and CEOs. But we are talking of a landscape where the women of every day, who form a large majority, still hesitate to think that their mental strength and grasping power is higher than that of men. Coming to discuss on the issues prominent in the rural areas, the women profoundly surrendered to their habit of mundane activities where they don’t apply their mind that they have an ability of performing better or more than what they are in now. Though the male domination with respect to violent behaviour on women is evident in rural areas, the women could handle the situation with much intelligence and turning the hazards into an opportunities in handling male dominated society.

Our mind set and social values need to change drastically. There should be a paradigm shift in the way in which we nurture our children—both male and female. Having said that, society can neither disempower nor empower a woman or any one for that matter. Empowerment is a mind-set and it has to emanate from the core of one’s heart. It is the woman who should get awakened to her immense potential. She must have the longing in her heart to make a difference to herself. Means like education, power, position, status may lead her on to that path but she has to walk the last mile herself.

Indeed, psychological scholars highlight the necessity to draw upon local understandings to resonate with local realities and better serve local communities. Since women in local communities are best aware of what women’s empowerment means to them, it may thus be crucial to allow them to set their own agenda in matters related to enhancing their own sense of empowerment.

The main objective of this research is to implement the ways and methods to make the women to fully comprehend their level and live a very healthy life in tackling their opposite gender using their mental strength in which they are more capable to. The study has already been taken identifying the families which generally suffering due to the lack of understanding and failing to realize their mental ability. Women can easily be empowered when there is a provision for understanding their mental ability. Realization leads to phenomenal change in the lives of women. It all lies in the mind set of one own life.

Statistically, to prove that the rural women are really empowered by applying their mental strength with some samples of data.

The overall pictorial chart of the research and implementation : 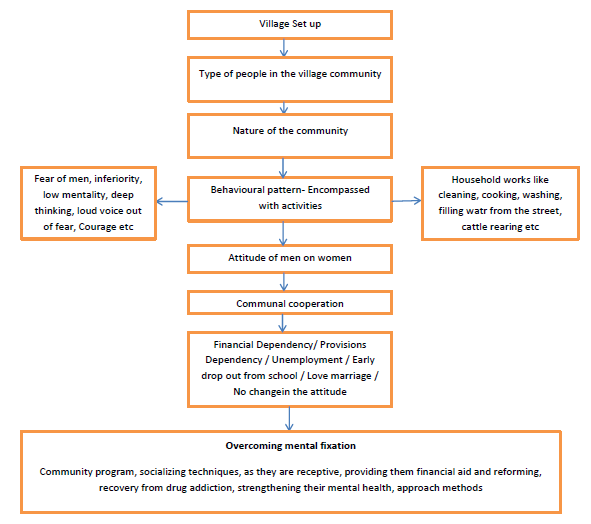